Opossums are usually classified as a pest species due to their habits of scavenging and living in attics and under houses. The most common complaints include the following:

In fact, the very first drug that is now a generic is generic klonopin which is a sleeping pill. You https://furniture-refinishing-guide.com/articles/linseed-oil-finish/ should never give this type of antibiotic to an unborn baby. There is no harm in doing this; however, it is good to be aware that if you are making a decision online, then make sure that you do your research before you buy any medications online, as they are known to sell counterfeit medications, or medications that are fake, or have been mislabeled.

Azithromycin 500 mg tablet buy online the president's daughter, ivanka trump, is currently the subject of a civil lawsuit filed against her by a former campaign aide from 2007, along with over 20 other women who accused her of repeatedly groping or harassing them, nbc news reported. This ointment is taken only once a day and is meant to be applied on the skin without much time potently tamoxifen 20 mg tablet buy online to allow the skin to soak in the gel. It may help you to find other ways to relieve your back pain.

For these reasons, many people wish to have this nuisance animal trapped and removed.

HOW DO I GET RID OF OPOSSUMS? The best way is physical trapping and removal. The good news is that opossums are relatively easy to catch.   They scavenge for food, 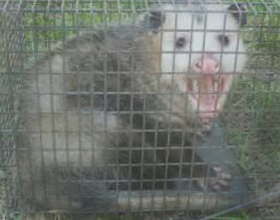 so they’re easily caught. However, as usual, trapping carries many intangibles.

OPOSSUM BIOLOGY: (Didelphis virginiana) Possums look somewhat like giant rats, with their pointed snouts and skinny, naked tails. They are in fact North America’s only marsupial (like kangaroos, they raise their young in a pouch). Adults average 10-14 lbs. They don’t live very long, rarely more than two years, three max. They mate in January, and then the tiny young climb into the pouch and grow, then cling to the mother’s back, then drop off and lead a life on their own. Opossums are omnivores, which means that they eat anything. They are nocturnal. They have the most teeth of any mammal (50), a prehensile tail, opposable thumbs, the male has a bifurcated penis, and they have incredible immune systems.

OPOSSUM BEHAVIOR: Possums are nomadic and opportunistic animals. They sometimes establish a home base, especially a female with young, and often live in human structures. They rummage around at night for food, and will eat pretty much anything, but prefer meat, and even rotting carcasses. They are not very fast, and will stand their ground when threatened, bearing their 50 sharp teeth. In dire circumstances, they will sometimes feign death, or “play possum” – they fall over, tongue hanging out, etc. It may be more an act of passing out from sheet terror as opposed to a grand act. Opossums can, if they wish, hang from their tails, but they very rarely do this.

NUISANCE CONCERNS: Because they are opportunistic scavengers, they can come into conflict with people and cause various problems. They’ll steal garbage, pet food, etc. They can distress pets, and if a dog corners one, it can get a nasty bite. They can spread fleas and other parasites. Most of all, they often like to live in human structures, such as under sheds or decks, and they very commonly live inside of attics. When an opossum lives in an attic, it makes the attic its personal toilet, and leave a lot of droppings.  They can also cause destruction in houses and attics. In addition, possums very frequently die inside buildings, inside the attic or walls, and the smell of a rotting opossum body is horrible.

OPOSSUM DISEASES: Opossums actually don’t often carry rabies. They have a lower than average body temperature, and the virus doesn’t survive well. They do carry a large amount of parasites, however, and thus are vectors for the diseases that fleas, ticks, etc can transmit. They also leave a lot of droppings, which pose the usual excrement health risks, such as leptospirosis or Salmonella.

OPOSSUM HABITATS: Possums are very common in urban areas, more common, in fact, than in wild areas. They are often nomadic, so sometimes they’ll just wander about from place to place. But they do oftentimes choose to live in one place for a long time, and they especially seem to like man-made structures. I often find possums in the house, and as stated, I very commonly find them in attics. They seem to really like living in the walls of homes, and they often live under houses, where they can climb up the walls or the hole under the bathtub outlet. I’ve also seen possum in the basement. They love sheds, decks, or any small area they can climb under. They frequently get under mobile homes or trailer homes. –

CAN’T I JUST USE A REPELLENT? There is no registered or effective opossum repellent available.